Honoring and Respecting Our Roots 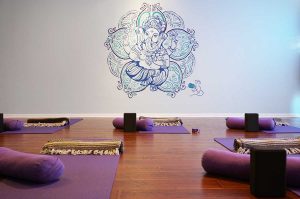 If you have attended a class at the Arlington Heights location, you might have noticed the mural on the wall of the practice space. The image is of the Hindu deity, Lord Ganesha and Mooshak (Ganesha’s vehicle in the form of a mouse). Ganesh is the God of Beginnings, Remover of Obstacles, and is the Lord of the People. Possessing a statue, figure or other artwork of Ganesh in one’s home or work space removes obstacles, provides protection, oversees your spiritual development, and brings success and fortune to those who revere him. His presence in the studio represented many important facets for a space like ours.

However, it is important to remember Ganesha’s origins, his ties to the Hindu faith, and the respectful ways to honor his presence within any space appropriately. This is something we have been exploring through readings and discussions – most notably with Vipan Wadhera, President of Hari Om Mandir of Medinah, IL. He helped to provide insights and guidance about appropriate steps to best honor the Hindu faith and traditions. Specifically, what it means to have this Hindu deity painted on our wall, what it means in the faith, and whether or not it is an appropriate way to honor him.

The Meaning Behind Depictions of Ganesh

Here are some key lessons about Ganesha we learned in this process that helped us on this journey. Ganesh has an elephant head, has four arms, and a pot belly. The depictions of Ganesh, whether sitting, lounging, or standing – and even what he is holding, the shape of his ears, and the direction of his trunk – all have different meanings.

The large shape of his head inspires people to think big, and the large ears encourage humans to listen more. His small eyes represent concentration, and his small mouth reminds us to speak less. The outwardly faced right palm blesses and protects those on the path to the supreme. He has one broken tusk that reminds us to throw away the bad and to keep the good. His large stomach wishes us to peacefully digest the good and bad parts of life.

There is more meaning behind Ganesh’s image than just his physical features. For example, the axe he holds reminds us to sever our ties to attachment, and the rope pulls us closer to our highest goals. The food at his feet, or prasada, tells us that the world is at our feet if only we take it. Also, in his lower left hand, he holds a sweet dumpling called modaka that is our reward for our dedication to daily spiritual practice.

At our studio, Ganesh’s trunk bends to the left which ties him to the left side of the body, the moon side, the blissful and peaceful side. If the trunk went to the right he would have connections to the sun, masculine, fiery side of nature. Lastly, the Mooshak is Ganasha’s ability to overcome all obstacles by controlling desire without allowing it to take him for a ride.

In addition, the statues or artwork of Ganesh can show him sitting, standing, lounging, or dancing. In the mural at Arlington Heights Ganesh is standing, which signifies rigidity and good attitudes. On our altar in the Lake Zurich location we have a sitting Ganesh, which represents relaxation and calm state of mind (which is what we hope you all leave the studio having). Our Lake Zurich deity is also bronze, which brings prosperity and joy.

Looking Back, But Moving Forward

More and more Eastern symbols and practices are being adopted in the West, which means we must take the time to become educated and aware of the meaning behind these traditions. Yoga was gifted to the West by the people of Northern India in the East. Many of their traditions are displayed and used in the West without us truly appreciating or understanding their presence or best ways to traditionally honor them. As students of yoga we must continue to educate ourselves and our students as a way to help us all grow in our practice.

The mural in Arlington Heights was painted on by the studio’s previous owner, and it keeps us connected to our teachers and our personal history. We respect and love the roots to the studio’s foundation, as well as what Ganesh himself represents for the studio.

We are now faced with the difficult decision of whether or not to keep the image on the wall. If we paint over the image, is that disrespecting Ganesh? Would we be losing a piece of the studio’s history? As I am writing this, I envision Ganesh’s axe reminding me to cut away any attachments.

Perhaps, to further practice this yogic path, the honorable thing to do is to move away from the mural, but still find ways to uphold and respect this, and other Hindu deities, and their ties to this practice.

Working with Vipan Wadhera has guided us down a path of respect, honor and appropriateness. On Friday September, 17, 2021, Priest Acharya Ramnaresh Vajpayee will join Susan, Sandy, and me at the studio to perform a special prayer or Puja to honor Lord Ganesha. This will help us to honorably and respectfully clear the path forward. Afterward, we will be painting over the image. We will later unify the studios by painting the image of the tree from Lake Zurich at Arlington Heights as well. We are extremely grateful to the President of the mandir, Vipan Wadhera, who provided insights and guidance about its appropriateness, as well as steps we can take to best honor the Hindu faith and traditions.

We hope in this way we will prevent future harm or disrespect to anyone who practices with us who is of the Hindu faith. And we hope that the tree image, also painted by the studio founder in Lake Zurich, will help both studios stay rooted to our foundation and teachers. 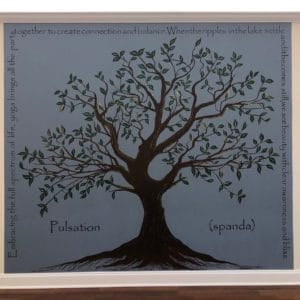 Yoga is rooted in religious ideologies, but it can be practiced by a person of any or no faith with the intention to help you deepen your religious or spiritual connection, your connection to yourself, to nature and/or your community. Yoga is a space to create unity between different ideas, thoughts, and beliefs with the equal intention of connecting us to our highest selves and to each other’s highest selves.

With that said, Susan, Sandy and I have always felt a deep appreciation and connection to Ganesh. He embodies so much of our hopes and dreams as the stewardesses of the studio and for its practitioners. To longtime members of our community, our lineage and community is highly valued and in no way do we want to eliminate our history. However, we do want to best represent yogic traditions even if that means letting go of ones that we personally hold dear.

We hope that you all find a connection of self, to each other, and to the cultures, people, and beliefs all around us. There is so much beauty in this world worthy of deep appreciation. We try to embody and represent these qualities by disseminating information to keep us all informed and thoughtful about this practice and educated about ideas that were not originally our own. By continuing to appreciate the traditions, history, and symbolism gifted to us we can strive to honor and feel more connected to our space, our practice and our yogic journeys.

About the Author: Alison Tseng

Co-Owner, ERYT 200, RYT 500, YACEP. Alison’s yoga experience is centered around Ashtanga and Anusara based practices. She started to practice simply as a way to get exercise, but as time went on yoga became critical in helping to deal with her General Anxiety Disorder. As a teacher, Alison strives to help students feel and see the benefits that yoga offers their mind, their self-confidence, and their lives, even when they step off the mat. She believes it is important to build strength, flexibility, and balance through proper alignment. She tries to inspire a sense of community that creates a fun, rejuvenating, and relaxing environment.
Page load link
Go to Top